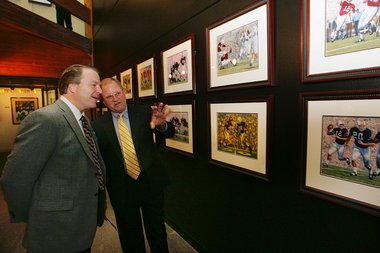 In this 2005 file photograph, artist Daniel Moore, left, discusses his work with Daphne Mayor Fred Small at a reception at the American Sport Art Museum and Archives.(Press-Register/Victor Calhoun)

BIRMINGHAM, Alabama – A federal  judge has dismissed the University of Alabama’s trademark lawsuit against artist Daniel A. Moore and his company New Life Art.

U.S. District Court Judge Abdul Kallon on Friday ruled in favor of Moore and against the University in the eight-year legal fight.

Moore’s attorney, Stephen Heninger, this morning described the ruling as a “total win” for the artist.

Moore is relieved at the outcome, Heninger said. The lawsuit by the university went “against public opinion and now against the law. He’s very happy,” Heninger said.

Heninger said that photographs and artistic renderings are carved out as a protected area for artists and the artists can transfer those works onto items. “If he transmits his art to another medium … it’s protected. It’s free speech,” he said.

Moore has painted realistic scenes from Alabama football games since 1979. He also reproduced the artwork as prints, calendars, and on mugs and other items. The university in 2002 told Moore he would need permission to depict the team’s uniforms because they are trademarks.

But Moore said he didn’t because he was portraying historical events and claimed his First Amendment rights. The university sued him and his company in 2005 for breach of contract, trademark infringement, and unfair competition.

In an appeal of a district court decision, the 11th Circuit Court of Appeals in June 2012 ruled in favor of Moore on the most significant issues of the University’s lawsuit.

But the appeals court sent the case back to Kallon to resolve the remaining contractual issues related to Moore’s depiction of the University of Alabama’s uniforms on mini-prints, mugs, cups, flags, towels, t-shirts, “or any other mundane products,'”

Kallon, according to his ruling, was asked by the 11th Circuit to determine whether New Life re-issued one product whose licensing agreement specifically prohibited issuance without first receiving the University’s permission, and that New Life failed to pay royalties when it later re-issued certain works that had explicitly been the subject of a licensing agreement.

The University also contended that even if the court found that New Life had not breached the agreements, it was still due to win based on New Life’s unjust enrichment from the sale of the re-issued products, according to the judge’s opinion.

“Based on the court’s review of the law and the facts in this case, the court finds that New Life breached one of the five licensing agreements–specifically the agreement covering ‘The Interception’ print–but the University acquiesced in New Life’s breach by purchasing and selling ‘mugs and other mundane products’ containing this print, and is therefore precluded from recovering damages based on the theory of breach of contract,” the judge stated in his ruling.

“The court further determines that the University is not entitled to damages based on the theory of unjust enrichment,” the judge ruled. “Accordingly, New Life’s motion for summary judgment is due to be granted, and the University’s motion is due to be denied.”