WSJ: Who owns Crimson and White?

On the football field, the University of Alabama had a great season, winning the BCS national championship for the second time in three years. In the courtroom, however, there’s been less cause for celebration.

For seven years now the university has been locked in a bitter legal struggle with Alabama artist Daniel Moore over his right to depict scenes from Alabama games in his paintings. The university argues that it has exclusive rights to its trademark, which includes the Tide’s famous crimson-and-white colors. Mr. Moore maintains that his paintings are covered under his right to free speech. Appealing to a higher court, he says the freedom to paint what he chooses is a “God-given right.” 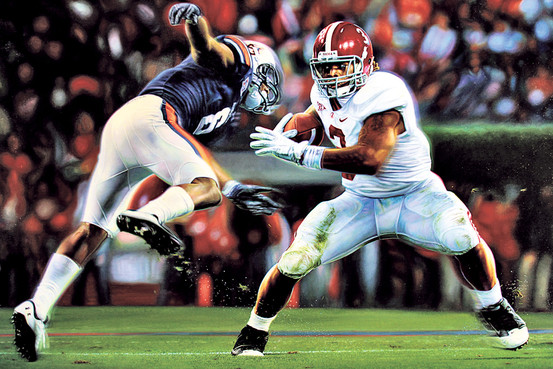 Simply put, the University of Alabama is telling Mr. Moore that he can’t portray its football players unless he purchases a license from them.

In a recent account of the case, the Birmingham News called the lawsuit “embarrassing.” News reporter Jon Solomon said in a phone interview last week that “Alabama couldn’t have picked a worse PR fiasco than the one they’ve created.”

To put it in football terms: Picture Alabama’s 2012 national champs playing a junior highschool squad—and going into the fourth quarter with the junior high leading. At least that’s what it looks like as the university, using the lawyers and other “material and financial support” provided by Collegiate Licensing Co., Alabama’s licensing agent, lines up against Mr. Moore and his Birmingham-based lawyer, Steve Heninger. (In addition to Alabama, CLC represents the NCAA and 100 other universities.)

So far, according to the Birmingham News, the university has spent nearly $1.4 million in legal expenses battling Mr. Moore. The irony is almost dizzying: Mr. Moore’s works have boosted Alabama football’s prestige, bolstering fan support for the same self-sustaining athletic department that is now seeking to restrict the artist’s right to portray the team in paint.

The late, great Bear Bryant must be spinning in his grave. As his career neared its end, Bryant himself selected Mr. Moore to commemorate his assault on Amos Alonzo Stagg’s record for coaching victories. In fact, several of Mr. Moore’s works are on display in the Paul W. Bryant Museum on the university’s campus in Tuscaloosa.

The legal wrangling began back in 2005 when the university filed suit against Mr. Moore to prevent him from using Alabama’s trademarks, including colors and logos, in his popular paintings. Many legal observers believe that Mr. Moore won a major victory in 2009 when a U.S. District Court in Birmingham ruled that the First Amendment gave him the right to paint, but that this right did not extend to merchandise such as coffee mugs, calendars and other items that the court considered commercial products rather than art.

The ruling satisfied neither party. The university appealed in an attempt to claim its trademark interests on any and all depictions, while Mr. Moore appealed on behalf of his right to use his artwork in all mediums.

Oral arguments were heard by the 11th Circuit Court of Appeals in Atlanta on Feb. 2 of this year, and the court’s decision, which will reverberate through all of college sports, is expected soon. There have been few relevant cases regarding art and trademark infringement, the most important being a 2003 decision by the Sixth Circuit Court of Appeals in Cincinnati. In 2000 Tiger Woods’s licensing company, ETW Corp., filed suit against artist Rick Rush to prevent him from selling prints made from his painting of Mr. Woods winning the 1997 Masters. The court decided that Mr. Rush’s painting, like Andy Warhol’s depictions of celebrities such as Marilyn Monroe and Mick Jagger, was sufficiently “transformative” to fall under First Amendment protection because the work—with Mr. Woods in three different poses with several past winners of the Masters—contained the artist’s own creative component and was not simply a likeness of Mr. Woods. Messrs. Heninger and Moore are hoping for similar logic from the Atlanta court.

Mark McKenna, a Notre Dame professor specializing in trademark law, is an amicus attorney for the case. In a phone interview last week, he said: “CLC and the university are using Daniel Moore as a test case. The bottom line is that Alabama and other schools want to control all the merchandise carrying an image associated with their schools. If they win, it isn’t clear how far they could take this. If Daniel Moore isn’t free to use an image from an Alabama game, how do we know that, say, Sports Illustrated wouldn’t be able to use a photo from an Alabama football game without the university’s approval? How do we know it would be OK for a newspaper to print a game photo? For that matter, could they even say ‘University of Alabama’ or ‘Crimson Tide’ in print?”

Does Mr. McKenna think that magazines and newspapers are concerned as they await the court’s decision? “They ought to be,” he says.

The University of Alabama responded by email: “While we regret the necessity of having to involve the courts in this matter, the lawsuit was necessary since UA must protect the value and reputation of our trademarks, name, colors, indicia, and logos by determining who uses them, as well as when and how they are used.”

Mr. Moore’s attorney, Mr. Heninger, says that “Alabama and CLC have made it clear from the start that they’ll go straight to the Supreme Court on this issue if necessary.”

It’s fourth-and-goal, and the 11th Circuit Court of Appeals has the ball.

Mr. Barra writes about sports for the Journal. His next book, “Mickey & Willie: The Parallel Lives of Baseball’s Golden Age,” will be published this fall by Crown.

A version of this article appeared Mar. 22, 2012, on page D4 in some U.S. editions of The Wall Street Journal, with the headline: Who Owns Crimson and White?.