Daniel Moore thanks Steve Heninger in The Birmingham News article

By Jon Solomon — The Birmingham News 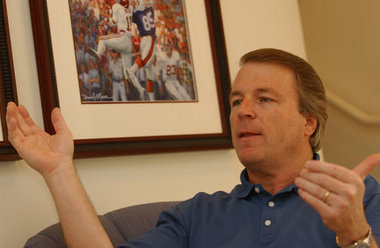 BIRMINGHAM, Alabama — A federal appeals court in Atlanta sided today in favor of Daniel Moore in the most significant issues of the University of Alabama’s 7-year-old case against the Birmingham artist.

The university had claimed that Moore’s paintings of Alabama football violated the school’s trademark rights. The 11th U.S. Circuit of Appeals upheld a district court’s ruling that Moore’s paintings and prints are protected by the First Amendment, and reversed the lower court’s decision by also protecting Moore’s prints on calendars.

“We’re ecstatic,” Moore said. “This is huge. I think it should come as good news to anyone who enjoys God-given and constitutionally-protected rights. It’s a significant victory for artists nationwide who before felt threatened by the aggressive and overreaching tactics by certain trademark owners.”

Moore won the heart of the case in 2009 when a federal judge ruled that painting Crimson Tide uniforms didn’t infringe on the university’s trade dress. Moore lost the right to reproduce his copyrighted paintings on coffee mugs and calendars. Alabama and Moore both appealed portions of that decision.

The latest ruling gives Moore the right to produce calendars from his paintings. The appeals court also overturned the previous decision prohibiting Moore’s art on mugs and other “mundane products,” remanding that back to the district court for further proceedings because disputed facts remain.

But on the biggest issues, the court found Moore did not violate the Lanham Act, which contains the federal statutes governing U.S. trademark law.

In a 33-page opinion, the appeals court wrote that artistic expression clearly outweighed whatever consumer confusion there might be by the public over trademark rights. The court wrote that Moore’s use of Alabama uniforms in his paintings are “artistically relevant” to portray famous Crimson Tide moments and that there’s no evidence Moore ever marketed unlicensed items as endorsed by the university.

Moore was a test case for Collegiate Licensing Company, Alabama’s licensing agent. CLC represents the NCAA, more than 100 universities and many conferences in the $4 billion industry of collegiate licensed merchandise.

CLC provided lawyers and financial support to Alabama in the case. As of January, Alabama said it had spent $1.4 million on legal expenses in the case, with funding coming from revenue by its self-sustaining athletics department.

“I knew this case was bigger than just about me,” Moore said. “I’ve had too many people contact me and indicate that the university and CLC were trying to go too far and pushing the boundaries of trademarking into something that the Lanham Act never intended for it to go. I can’t say enough for (attorney) Steve Heninger, who stood right in there and battled the giant with me for over seven years now.

Alabama, which could not be reached for an immediate comment, could appeal to the U.S. Supreme Court. Moore said he doubts the Supreme Court would hear the case since the large disputes are agreed upon by multiple circuits.

“The big issues are resolved,” Moore said. “Outside of the remote possibility of this being appealed to the Supreme Court or perhaps being reviewed by the 11th Circuit Court, it’s over. We won and we’re so thankful for it.”

Article courtesy of The Birmingham News, written by Jon Solomon